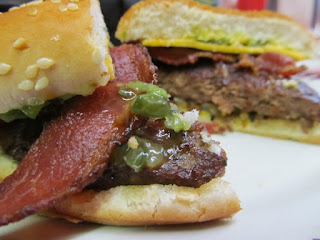 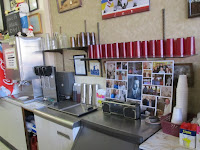 The entrance to Windmill Lunch at 518 Selkirk Ave is a time portal to the 60’s when Greek restaurateurs put Winnipeg on the map. Gus Damianakos bought the diner in 1969 and ran it for 46 years until his passing in July, 2016. Gus “would never allow someone to go without and helped many.” Daughter Angie has picked up the spatula and the grill is still busy. 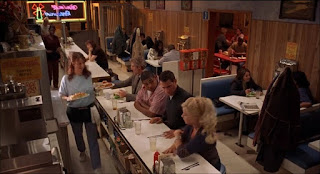 There’s a Seeburg Consolette jukebox in every booth, milk shake station behind the counter and memorabilia spanning the decades. Several Hollywood movies shot scenes at Windmill Lunch and you can rest your elbows on the same Formica counter top that Richard Gere did in ‘Shall We Dance.’ A wonderful mural by Richard Manoakeesick features on the side of the building. 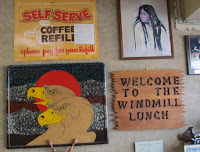 Windmill Lunch has been described as an “informal community space for the neighbourhood” and it was full the last two times I went for lunch. Selkirk Ave was closed for reconstruction earlier this summer, which put a big dent in Windmill Lunch’s business, but the street’s open now with plenty of parking out front. 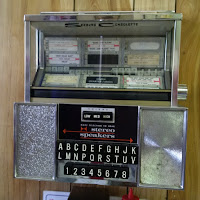 Regulars know to head straight for the self serve coffee station before sitting down. Our server was kept hopping for the lunch rush; she was quick and friendly. When you come to Windmill Lunch, know what you want and don’t dilly-dally when ordering! 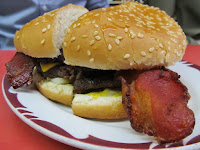 Our waitress carefully wrote down each of our orders on a pad of guest checks, then (presumably) tore them into pieces and threw them into the air before passing the pile of slips to the kitchen. When our food started coming out there seemed to be no rhyme or reason to it, but she set it all down and we sorted it out (mostly) among ourselves. I initially got a plate of fries, and received my burger pretty much by the time everyone else was done eating theirs. Little bowls of gravy came out eventually (whether ordered or not), but most of the table fries were eaten by then. The experience was a bit comedic. 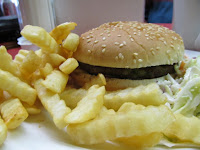 The burgers were served on small, round plates and cut in half like a sandwich. Fries came separately on a small oval plate that held as many of the golden crinkle cut French fries as could be piled on. The exception was the ‘Deluxe Hamburger and Chips’ that came with coleslaw served together on a platter. ‘Chips’ were thin potato slices, homecut and deep fried. Our table got the last two orders of onion rings and they were a hit. The special was a cheeseburger and chips for $6 – prices are low. If you want lettuce and tomato, the ‘Fat Specialty’ is the burger for you. 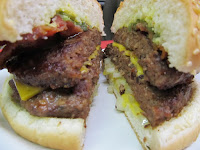 I was looking forward to trying the Chilli Burger, but they were out, so I had a Bacon Cheeseburger instead. The bacon was good – two meaty slices cooked leathery. The beef patty was dark, dry and well cooked – a fairly typical diner round with peppery seasoning. It wasn’t a huge patty, but you can make it a double for $1 more. No one in our group took on the ‘Windmill Special’ triple burger today, but Mike opted for a double. The routine sesame seed bun was fairly large and did a good job holding its cargo. 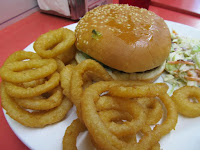 “Our server, Tammy, called us all ‘Darlin.’ I found it refreshing” wrote Dani.  “Our burgers came sliced like a sandwich a la Salisbury House – works great for me – maybe I won’t be as messy this time. I ordered the burger with no sides. I liked that there was no tomato and lettuce on it. It came with raw onions, relish, mustard, and 2 slices of bacon. The patty was nicely spiced – I’m really enjoying this.” 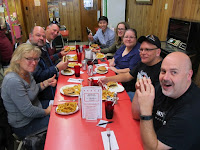