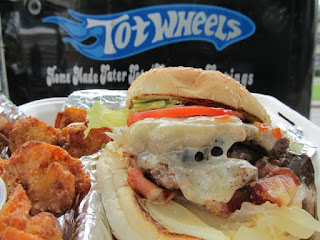 You’ve probably heard about the habit forming Tots, but did you know Tot Wheels also makes a great burger? Owner and chef Scott Moffat tweeted the Double Bacon Burger special and I double timed it to 275 Broadway to be first in line at the flashy food truck. 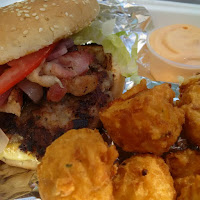 Scott makes the patties in house – a blend of beef, pork and Italian sausage with his own recipe of herbs and spices. They were juicy and delicious – the star of the stack. They cook each order fresh and the two thin patties cook faster than one thick one with twice the flavourful grill crust.

The bacon is fried up fresh and wrinkly; it’s usually cooked soft, on the brink of undercooked for some diners. “It takes a little longer but ends up being worth the wait. People don’t complain as long as the quality is there” says Scott. The assembly is completed with grilled onions, Havarti cheese, ripe red tomato and shredded lettuce. It’s capped with a grilled sesame seed bun that’s up to the task if you need to one-hand it. “All of our products and ingredients are local and organic as much as possible.” 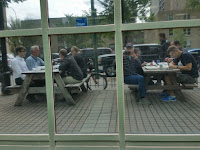 Dani wrote “The burger had two smallish patties and three slices of bacon with sautéed onions. The flavour was nice, just enough spice. The Dijon added a tanginess to the whole package.” Mat added:“Really rich in flavour. Italian sausage in patty is excellent.” Les scribed “The Havarti cheese was a classy touch! All held together nicely & the bun was good.”

Of course, the burger is accompanied by heavenly tots. The combo comes with Sriracha or garlic aioli for dipping. Like everything else in the truck, the Tots are made fresh and they’re crispy-golden on the outside, soft and cheesy-gooey on the inside. The mashed potato blended with herbs, spices and cheese is rolled and dropped into the fryer per order. You can watch Shaw TV’s spot to see Scott in action. 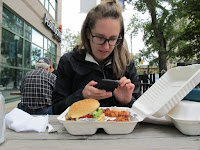 Jeff exclaimed: “Excellent burger – plenty of beef & bacon, and a huge bun (almost too big) that was nice and soft, but held together nicely. Patty was cooked just right. Perfect amount of tots to compliment – spicy aioli was excellent.” Karen’s a fan: “I love the Tot Wheels truck! The tots were terrific – big and crunchy.” 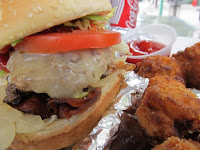 Scott plans on keeping the burger on the menu and adding an additional sandwich.  Word is the next creation may be a Mac ‘n Cheese grilled cheese with pork belly. Tot Wheels will be at Many Fest – Food Truck Wars again this year from Sept 9-11, 2016. “Many Fest is our – and most truck’s – busiest time of the year, I’d like to serve the burger at the festival but it might not be possible with the volume of people.” 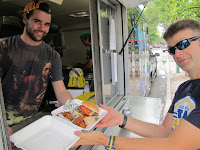 Scott took over the truck from Darryl Crumb in March, 2016. Scott was the lead chef at the Exchange Restaurant for two years where they worked together and he learned about running the food truck from Darryl. Tot Wheels also caters events – and surprisingly – weddings! “We have done wedding dinners and late night snacks.  This saves the bride and groom a ton of money and has turned out excellent every time.