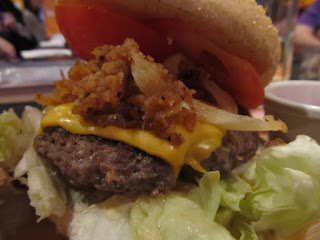 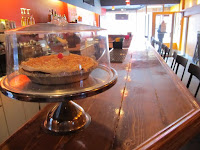 Ashley Meilleur opened The Planit at 285 Portage Ave in August 2015 upsizing from her 12 seat Vinyl Diner in the Garrick Hotel. It’s a great location in the heart of downtown Winnipeg’s burgeoning Sports, Hospitality and Entertainment District (S.H.E.D.) The buildup of condominium high rises and nearby MTS Centre should mean plenty of Planit patrons for Ashley and partner Sandra Soares for years to come. 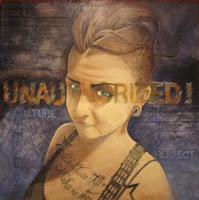 Our table was presided over by a painting of Ashley. She told the story of how the portrait went for auction at a fundraiser, and that she felt funny at the thought of it hanging in someone’s home so bought it herself. The second floor kitchen is shared the Creating Opportunities & Rewarding Experiences (C.O.R.E.) culinary training program that “provides skills for those transitioning from the streets back into the workforce”.  As their website proclaims, The Planit is “Proudly gay owned and operated and we are all about culture, diversity and supporting our community.” There are live entertainment events in the evenings and starting May 1, Planit will open a patio on Portage Ave.

Interior colours are from La Bamba (and briefly Reuby’s Gastropub). Diners are greeted by an upright piano soundboard leaning against the wall and a bright and cheery space. I took one bite of The Planit Burger on a previous visit and knew Burger Club had to dine here. On the day we visited there was a new menu and new chef (Ashley) with The Planit Burger replaced by two new beef offerings – The Ultimate and The Mushroom Swiss Burger. Sadly, the Brioche bun delivery didn’t make it on time for Burger Club’s lunch. 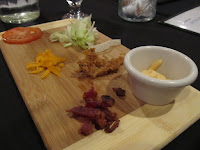 Sandra and server Brittany were great hosts and Ashley prepared ingredient platters so we could see and taste the individual components of our stacks. Along with the Red Thai Chicken and Rice soup, Ashley surprised us with a “cheeseburger” soup for anyone (like me) who wanted to make it all about the burger. Both soups were a large serving, hearty and delicious. “The soups are an adventure” wrote Cary. Have the soup! 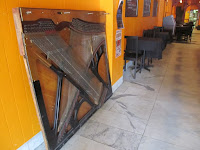 The two Angus chuck beef burger assemblies are similar, but with cheddar cheese and onion rings on one, and Swiss cheese, bacon jam and mushrooms on the other. Both come with flavourful Sriracha aioli and fresh groceries. The planned Brioche would have raised Burger Club’s rating from the substitute bun. 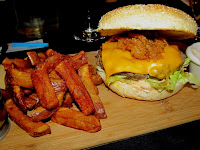 The home-style patty was soft and airy but held together well. Dani commented “Love the flavours of the patty! All of the food had such a wonderful variety of spices and flavours.” “Great burger, nice little bit of spice” wrote Chris. Cary also had the Ultimate Burger and scribed “Burger was FRICKEN TASTY!” The fries were delicious and consensus was they had a light dusting of cinnamon. 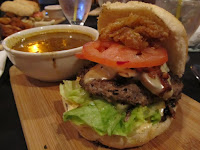 I had the Mushroom Burger and the mushrooms were fresh, thick sliced and sautéed to perfection – the highlight of my sandwich. “The hand battered onion rings made the burger for me! OMG – so flavourful” wrote Stephanie.

The Planit also makes a vegan Earth Burger with 14 grams of protein – more than the beef offerings! April wrote “I will have to come back to get the protein-packed veggie burger. Sounds like a good pre-roller derby meal …” Russ liked the music “Bonus points for playing Grimes the whole time.”