A Winnipeg man is facing manslaughter charges after police say he stabbed his live-in girlfriend in a fit of rage before quickly helping to get her to the hospital. Beverly Custer, 34, died at Victoria Hospital early Wednesday after she was taken to …

Police say an injured adult woman went to the Victoria Hospital shortly before 1 a.m. and was later pronounced dead.

A Manitoba woman may be forced to leave the province because the province’s drug program won’t cover the cost of her lupus medication, which she needs to function on a daily basis.

Woman, 23, dies after being hit by car in Winnipeg
www.cbc.ca

A 23-year-old woman who was rushed to hospital after being hit by a car in downtown Winnipeg on the weekend has died.

Emergency crews are at the scene of a crash between a train and SUV in Winnipeg.

Woman in unstable condition after collision between train, minivan
www.winnipegfreepress.com

One woman was taken to hospital following a crash between a train and minivan this morning. The accident happened at approximately 11 a.m. on Beaverhill Boulevard near Abington Road in Southdale. It appears an eastbound red minivan struck a northbound CP train at the crossing. Winnipeg police

A 23-year-old woman who was fatally struck by a vehicle was a socially and environmentally conscious woman who was always there for others, according to her friends. Police confirmed Wednesday that a woman struck late Saturday afternoon on Broadway near Donald Street has died. An online…

A woman was critically injured after she was hit by a car in downtown Winnipeg late Saturday afternoon, according to police.

A 40-year-old Waywayseecappo woman has been charged after a fatal collision between an SUV and a school bus carrying students on Thursday.

A Manitoba woman facing a new murder trial in the conspiracy killing of a former pro wrestler won’t win back her freedom as she awaits a new day in court. Rita Cushnie, 59, learned today she was being denied bail while awaiting her retrial for first-degree murder in connection with the death of

A Manitoba woman accused of sexual assault by allegedly transmitting HIV to a man through unprotected sex has lost her fight to get her case thrown out of court due to delay. Marjorie Schenkels, 27, will face trial later this year despite her protests that Manitoba justice officials’ tactics led

WINNIPEG – A 27-year-old woman is dead after a snowmobile hit a dock on Gods Lake on Tuesday. Gods Lake Narrows RCMP were called to the collision at about 2:30 p.m., they said in a news release. The woman, who was riding the snowmobile alone, …

A 27-year-old woman is dead after she drove her snowmobile into a dock at God’s Lake Narrows.

A 27-year-old woman was killed in a snowmobiling accident on God’s Lake.

SUSAN McVarish is trapped on her East Kildonan property due to windrows of hard-packed ice chunks covering her pathway to the street and another blocking her garage. The 64-year-old called 311 to ask fo the city’s help cutting through the metre-high windrow on the boulevard in front of her

INDIANAPOLIS – Police say three people have died after a shooting at an apartment building in Indianapolis. When officers arrived at the building Sunday night, they found one man with a gunshot wound lying outside the building and another two victims — a man and a woman — with

An incident involving a 12-year-old boy Thursday has Winnipeg police searching for two adults today. The encounter occurred at approximately 3:25 p.m. in the area of Sargent Avenue near Erin Street. The boy was approached by an unknown man and a woman, who began to ask him questions. The boy

A Steinbach woman has been fined $4,500 for her part in a “get-rich-quick” scheme that siphoned millions of dollars from investors across Canada.

Rita Cushnie has already won a new trial in a notorious Manitoba murder-for-hire case involving a former pro wrestler. Now she is going to attempt to win back her freedom. Cushnie is set to apply for bail Wednesday, four months after Manitoba’s highest court overturned a first-degree murder Winnipeg police look for witnesses to woman getting hit by car on Pembina …
metronews.ca

Winnipeg police are asking anyone who saw a woman get hit by a vehicle on Pembina Highway Tuesday night to give them a call. The 64-year-old woman was taken to hospital with life-threatening injuries after a northbound vehicle hit her while she walked …

WINNIPEG – A Winnipeg woman has been told by the city she owes 10 years worth of unpaid taxes — taxes she says she thought she had paid. Kathleen Carpenter is facing an $18,000 bill dating back to 2003. A clerical error meant another person was …

A woman is in stable condition after being hit by a Winnipeg Transit bus early Saturday morning.

WINNIPEG – Roseanne Lee Eaglestick has been identified as the woman who was found dead at a Balmoral Street apartment block on Monday. Police were called to the Almor Manor at 247 Balmoral St. before 8 a.m. and … 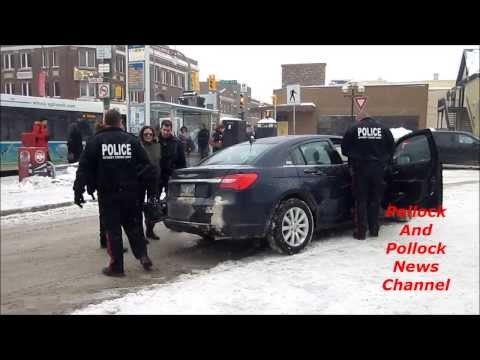 A 64-year-old woman was sent to hospital with life-threatening injuries after she was struck by a vehicle while walking across Pembina Highway late Tuesday night.

Police are investigating a suspicious death in a West Broadway neighbourhood.

Woman, 77, carjacked in own garage
www.winnipegsun.com

A 77-year-old woman had just safely parked her car in the garage when she was assaulted and robbed.