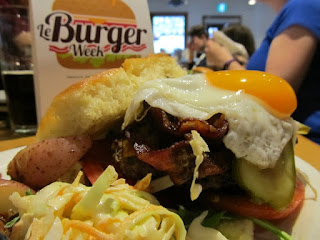 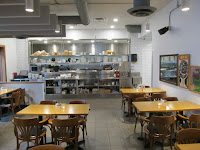 The newly renovated Stella’s at 116 Sherbrook is bright and roomy. There’s an open kitchen and interesting artworks. A plethora of personnel took turns greeting our group with sincere smiles and conversation. They’re a happy bunch and the service can’t be beat. 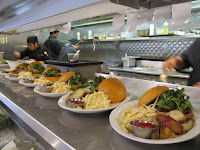 It was LeBurgerWeek – the greatest week of the year – and we were at Stella’s to feast on their homage to Asian/Latin/Caribbean/LA street cuisine boldly named the Choego (the best). 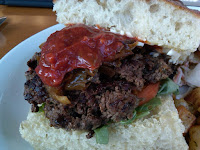 I had the Grass-Fed Beef Burger a few years back at Stella’s @PlugIn when the patty consisted of a collection of tasty morsels in close association, perhaps held together by some strange beefy magnetism, but not “pattyfied.” Today’s beef round took on a more traditional form but was quite a departure in flavour. 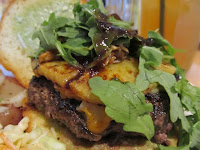 The Choego patty had good texture, not too soft and not to dense, but it was lean and dry. The seasoning was complex – cilantro, and opinions varied from caraway to thyme. The grilled ring of pineapple added some moisture. As you’d expect from Stella’s, all the ingredients were fresh and healthy, evinced with the generous pile of Arugula. Although present, neither the smear of avocado mayo nor the cheese was evident. The house baked fun was fresh, fluffy and did a great job wrapping the stack.

“It’s burger week! It’s burger week!” exclaimed Geoff. “I had the Stella’s special entrant into the ever-expanding burger week roster. The Choego wasn’t a bad burger but there were aspects that could have been improved. The Arugula had a bit of conflicting taste with the rest of the creation, but the pineapple had a good flavour and added some moisture. Overall the burger was a bit dry, meaning there was no burger detritus left on the plate afterwards – a rarity for me!” 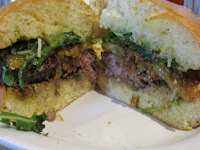 “The burger had everything going for it, but some of the flavours did not work for me” critiqued Karen. “Perhaps it was the Arugula because I like pineapple on a burger. Overall a nice burger – good potential for the patty – but too many special ingredients made for complex flavours that didn’t appeal to me.” 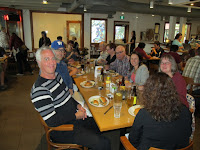 “Hmm … conundrum. Love the grilled pineapple and I love Arugula on a burger but something there was amiss” pondered Sandy. “Did the cinnamon change the chemistry of the pineapple? Nope, it was great on its own. I suspect the Arugula was extra peppery. A flavourful patty, albeit a little dry in spots. Love the Ally McBeal bathroom!” 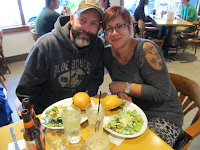 Every burger is someone’s favourite, and the Choego was Maureen’s. “Not the flavour of a normal burger, but wow, absolutely delicious in its uniqueness. Burger held together really well and didn’t have to lick elbows!” Jeff liked it too: “Delicious! I was a little worried when I read the description that flavours would be too overpowering, but they worked together in perfect harmony. The bun was amazing – perhaps best I’ve ever had – in perfect proportion to burger and held together perfectly to the last bite.” 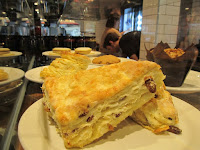 There were differing opinions over the Choego bun; some thought it perfectly sized to the patty, with bun and beef in every bite right to the end, but others thought it a little too ample. “Burger held together like a champ” jotted Brad. Les scribed “I like a bun you can pick up and eat! The bun held together for the whole experience so kudos for that!” The regular menu bun didn’t fare so well. Dani wrote “My burger came with a Focaccia bun. Although it was good, it didn’t hold its load well and disintegrated. Decided to eat it with a knife and fork. Hopefully I won’t get kicked out of burger club for introducing cutlery.” 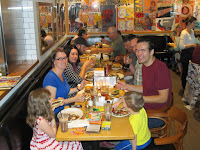 A few people opted for the B&E Burger and enjoyed it. April exclaimed “My burger was a great choice! The B&E burger (with the addition of cheese and Avocado) was very yummy. The first half was relatively mess-free, however the second half (when the egg yolk broke) was running down my arm as I ate it.” Jacques wrote “I was curious about the combination of egg and burger and it did not disappoint. The bun was trouble from the get-go. Do not trust Focaccia buns to hold your burger. It was an eggcellent burger.” 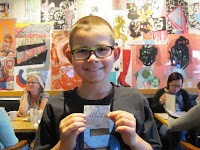 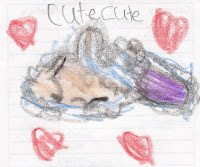