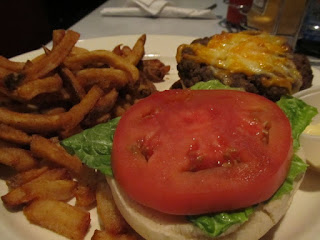 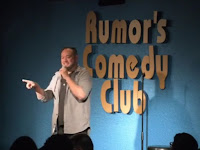 Rumor’s Comedy Club’s Early Burg Special includes a burger + show for $12. It’s a great deal. Ron Josol provided the laughs, and man, the guy’s funny! The entire Tuxedo Park mall is under destruction, but if you persevere, you’ll find your way through the scaffolding and descend to Rumor’s. The burger special is served between 6 and 7 and they won’t sell you a ticket unless you’re there (no ordering for tardy friends). 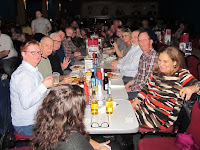 We were bumping elbows eating our burgers, but once the show started, being packed in felt right. The room had energy. 250 people show up, order all at once and the servers have to navigate the crowded space serving out drinks and meals that all look the same. Our waitress Jacklyn (sp) did an amazing job. 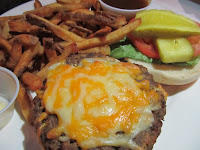 The burger was big and filling, but isn’t going to win any awards. Really though, you’re here for the comedy and the ‘free’ burger on Wednesday’s is icing on the cake. “Dinner and a show, gotta love it!“ wrote Dani. Burger Club had a big turnout, and one thing we all agreed on was the fries were great and the Poutine *was* award winning. 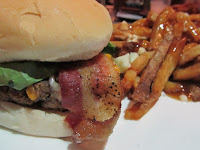 The well cooked patty was ‘home-style’ with lots of add-ins, dry and crumbly. I’d say similar in taste to Super Boy’s. The bread-wrap was the weak link – a Wonder Bun would’ve been a step up. However, it was a stack in conflict – the bright red tomato and delicious easy-bite leathery bacon were in juxtaposition with the other ingredients. The patty was topped with a sprinkle of shredded marble cheese and broiled. It all made for a good presentation served bun-open.

Pro-tip: The special is for a cheeseburger and fries, but add bacon for $1.75 and step up your fry game to Poutine with real cheese curds for $3. You won’t regret it. The Greek salad was also awesome. 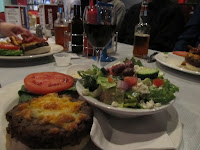 Geoff reviewed: “A big crowd for our burger day down in the basement at Rumor’s. The burger is pretty basic, and not a lot of leeway on the toppings or selection. The Spartan burger comes with only cheese, tomato and lettuce, with a side of mayo. The patty was a bit crumbly, and not a tonne of flavour in it. There was talk of onions in the meat, but I didn’t spot them. The club itself is an institution and it was an inspired choice. The servers were friendly and fairly efficient. The fries were tasty.” 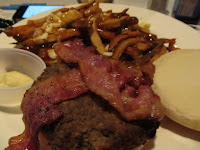 Stan usually see’s the silver lining: ”No complaints from me, but burger was just kind of average. Oh! I complained. Bun didn’t hold together. Had to go to fork & knife for the last third.” Maureen wrote “Yucky bun – like eating Kindergarten paste.” Editor’s note: how does Mo know what Kindergarten paste tastes like? Isabel scribbled “Tasted more like a Gyro than a burger. But a great bargain with the show included. Fries were good!” 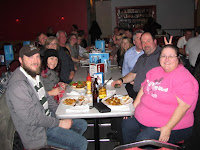 Brenda had a Disney level tragedy: “Since they had no relish, the waitress brought me two quarters of a pickle. I tried cutting it smaller with a butter knife, but no, it did not work. So I just put it on top. Took a bite and the pickle literally cut the bun in half.” 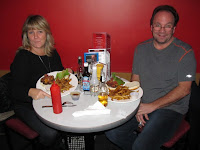 Cary scrawled on his little review slip: “The patty has a lot of filler and the bun is very plain. Good Poutine. Joke (because at Rumor’s): How does a burger acquire good taste? With a little seasoning  (ba dah, dump).” 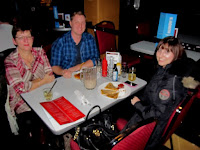 We learn so much about each other at Burger Club. Laura has been going to Physio and her “butt is loose now.” It was their anniversary and someone in the kitchen inadvertently made her the butt of a joke by serving Willy his burger with two top buns and Laura two bottoms.

Nat (with an h) *loved* the poutine: “Great fries and Poutine -> big compliment coming from a Quebecer!”