They came, they partied, they spent.

A list of winners at the 43rd Juno Awards
www.winnipegfreepress.com

OTTAWA – The Conservative party lost top 2015 election organizer Dimitri Soudas Sunday, amid mounting concerns he was using his position to help his fiancee’s nomination bid in a suburban Toronto riding. Party brass have been trying to convince grassroots Conservatives that they can count on

BEIJING, China – Calgary’s Kevin Koe improved to 3-1 at the world men’s curling championship after rolling to a 9-1 victory over Russia’s Evgeny Arkhipov on Monday. With the win, Canada moves into a tie for second place in the 12-team round-robin standings with Germany’s Johnny Jahr. The

TOKYO – Japanese automaker Mitsubishi Motors Corp. said Monday it is buying Ford’s shuttered plant in the Philippines to grow in market where car ownership is on the rise. Mitsubishi Motors said it was acquiring the plant in Laguna, south of Manila, from Ford Motor Co. to boost production and

The same weekend Winnipeg hosted Canada’s Juno Awards, federal opposition critics came to the city to draw attention to what they see as Ottawa’s missteps in the music industry. Cuts to one program geared to help musicians market their work in the post-CD world and new fees for small bars and

A man was taken to hospital in critical condition after being hit by a taxi earlier this morning. The incident occurred in the area of Regent Avenue and Stapon Road in Transcona at approximately 1 a.m. The man suffered serious injuries to his lower body. Police say he has since been upgraded to

It came in like a lion 30 days ago and now it looks like March will go out with a roar, as well. A strong Colorado low blowing in from North Dakota is expected to bring snowfall and blowing snow in southern Manitoba this morning, with the heaviest amounts forecast for the southeastern corner of

Winnipeg police have caught up with a murder suspect they’ve been hunting for weeks in connection with the city’s first homicide of 2014. Justin Atelard Catcheway, 30, is in custody at the Winnipeg Remand Centre today charged with second-degree murder of Justin Desmarais. On Jan. 19 at about 3…

Mounties in Stonewall were called in after a hockey game involving 14-year-olds turned ugly, both on the ice and in the stands.

The Winnipeg forecast is for cloud and periods of snow and blowing snow in the morning and a high of -9 C. Snowfall of two to four centimetres will be accompanied by 50 km/h north winds gusting to 70 km/h. The blizzard warning for later this morning …

The Winnipeg Jets on Saturday night have a chance to do what no other NHL team has done this season: Beat all three California teams on their own ice.

When this version of the Winnipeg Jets last made the playoffs, they were known as the Atlanta Thrashers and it was two years after another NHL lockout and five years before the next one. Two seasons are now complete …

LOS ANGELES — The Jets hit the Staples Center ice this afternoon to prepare for their first road game against the Los Angeles Kings since moving to Winnipeg nearly three years ago.

INDIANAPOLIS – Police say three people have died after a shooting at an apartment building in Indianapolis. When officers arrived at the building Sunday night, they found one man with a gunshot wound lying outside the building and another two victims — a man and a woman — with

The Winnipeg Jets announced today they have recalled Ben Chiarot, Michael Hutchinson and Zach Redmond from the AHL’s St. John’s IceCaps. 22-year-old left-handed defenceman Chiarot has played 63 games with the IceCaps this season. He has recorded 17 points and 85 penalty minutes. Originally drafted by the Atlanta Thrashers in the fourth round, 120th overall […]

The Juno Awards in Winnipeg was packed with solid performances, capped off by a classic from Winnipeg’s own Bachman-Turner Overdrive. Tegan and Sara were the big winners this year, taking home three awards for Group of the Year, Singe of the Year for “Closer” and Pop Album of the Year for “Heartthrob”. Serena Ryder and […]

Stonewall RCMP are investigating a possible assault during a minor hockey game. Fighting broke out around 4:30 Sunday afternoon in the last period of a championship game between Stonewall and Dog Creek First Nation. An RCMP spokesperson says the game’s official may have been hit by one of the 14-year-old players, along with some parents […]

just a few pictures i took last summer. i was born in BC but winnipeg is home. :)
www.reddit.com

The relationship between Bachman-Turner Overdrive’s four core members was once so frosty, the band couldn’t even agree long enough to be inducted into the Canadian Music Hall of Fame.

Junos all about Tegan & Sara
www.winnipegfreepress.com

It’s official: the 43rd annual Juno Awards were all about Tegan and Sara. The twins picked up awards for Group of the Year and Single of the Year — for the cotton-candy synth-pop gem Closer — at Sunday night’s ceremony at the MTS Centre. Their latest album, Heartthrob,…

Winnipeg police are looking for a male suspect following an armed robbery Saturday. Police said the suspect entered a convenience store in the 600 block of Ellice Avenue about 11:50 a.m. He walked around the store and gathered various items. He went to the cashier, took out a knife and stole

Police are looking for a man who robbed a West End convenience store at knifepoint.

Police are on the lookout for a gun-toting purse-snatcher.

WINNIPEG-RCMP were called to a minor hockey game Sunday afternoon. The match was between the Stonewall and Dog Creek First Nations girls hockey team. Stonewall RCMP say a referee was struck by a 14-year-old player and parents were fighting in … 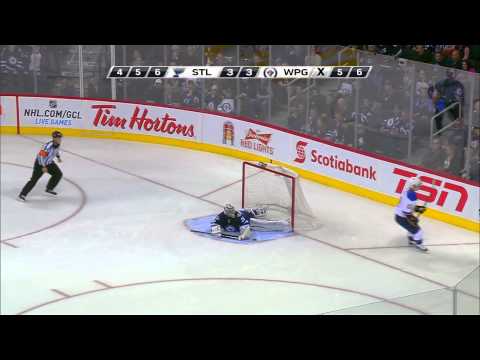 If you enjoyed this video, follow me on Twitter at @Buc07 for more behind the scenes info about regional television coverage of the Winnipeg Jets!

Winnipeg Jewish recruits aren't quite what was expected
www.timesofisrael.com

JTA — When the leaders of Winnipeg's Jewish federation sat down 13 years ago to try to figure out a way to reverse the community's decline, they came up with a novel idea: recruit Jews from overseas. The idea was pretty straightforward. Capitalizing …

Today the Honourable Michelle Rempel, Minister of State for Western Economic Diversification announced $170,000 in support to Economic Development Winnipeg to attract international investment to Winnipeg through the YES! Winnipeg initiative.

'Potholes' can get in health's way
www.winnipegfreepress.com

It seems as though I have been writing a number of seasonal articles in anticipation of spring, yet sadly, spring has not yet sprung. So this week, in lieu of anger management — another suitable topic considering our elongated winter ‘bliss’ — let’s shift our focus to something quite

Environment Canada has lifted its watch for a Colorado low that was supposed to hit Manitoba overnight Monday. Around noon, Environment Canada’s forecast was changed. The agency is no longer calling for up to 25 centimetres of snow across southern Manitoba. The forecast now calls for blowing

Love always in the air at BDI
www.winnipegsun.com

There’s just something special about licking ice cream and gazing longingly into your lover’s eyes while standing on a bridge over a rushing river.